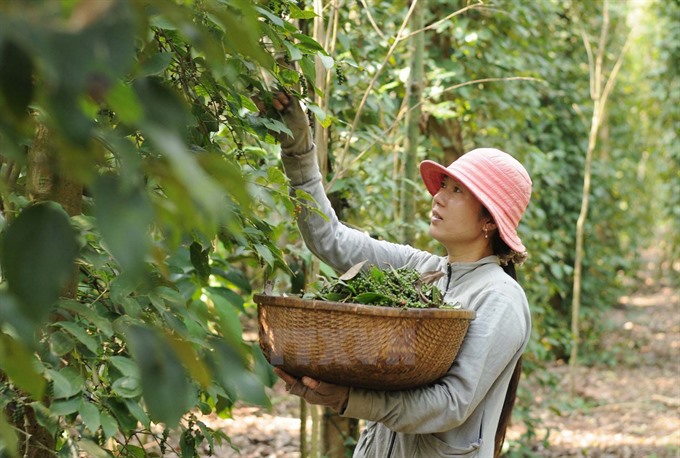 A farmer harvests pepper in Đồng Nai Province. The purchase price of pepper has seen the steepest reduction in the last five years. – VNA Photo An Hiếu

Farming product trading agencies in these Tây Nguyên (Central Highlands) provinces said this was the steepest reduction in the last five years. Many farmers said they would hold off on the sale of pepper and wait for better prices in the future, Tuổi trẻ newspaper reported.

A representative from an enterprise exporting farming products said the reduction was due to high supply while demand had not increased.

The total area used for pepper cultivation in the Central Highlands and other regions nationwide has exceeded their plan, therefore supply in the market has increased, the representative said.

Hồ Phước Bính, deputy chairman of the Chư Sê Pepper Association, said the current low price of pepper was not unusual. Furthermore, according to some forecasts, pepper prices over the coming years are expected to drop to VNĐ50,000 per kilo, similar to previous levels, due to the increasing supply of pepper.

According to statistics of the pepper industry, Việt Nam has the total area of 130,000-150,000ha, thrice the amount of area allotted under the development plan for pepper cultivation.

Therefore, Việt Nam’s total pepper output was expected to reach 300,000 tonnes in the next 3-4 years, which would be enough supply for the world, Bính said.

However, Bính said farmers should not destroy their pepper trees when prices decrease and grow them when the price surges. They should focus on investing in the development of clean pepper and improving quality, instead of worrying about pepper consumption or reductions in pepper prices. – VNS

Some of the most notable benefits of bitter melon tea include its ability to fight against cancer, prevent chronic disease, lower cholesterol levels, regulate diabetes, stimulate the immune system and help the metabolism, among others. There are a number of side effects to drinking this tea that must be considered, including dangerously low bloodsugar, liver complications, severe allergic reactions,...

Botanical Name: Alpinia officinarum. The medical applications of galangal root are in many ways the same as its close relative ginger. It is a bitter herb that is used to promote digestion and stimulate appetite and production of digestive fluids. The...

Cardamom or elaichi is the ‘Queen of Spices’. But exactly what is black cardamom? Let us tell you that before we head to the benefits. Black cardamom is a small herb with strong aromatic fragrances and can be availed in...

As for what to eat with a sore throat, for most of Chinese the answer will probably be Malva Nuts, which is a commonly used Chinese herb also known as Pang Da Hai in mandarin-speaking world. Thanks to its awesome...